Candi Badut or Badut Temple is located in the middle of a residential area of Karang Besuki village, District of Dau in Malang. It is just 10 meters from the small main street of that area. I didn’t expect it but it just makes this temple unique. 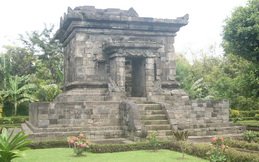 Temple is called candi in Indonesian. Badut means clown. Like me, you must wonder what has this temple to do with it? No, this temple is not funny at all but it is interesting. There are 3 possible reasons about this name.

Candi Badut stands on an area of 2,808m2 and 508 meters above the sea level. The area is surrounded by mountains. At the east there is Semeru Mountain, at the west, Arjuna Mountain, at the north, Tengger Mountain and at the south, Kawi Mountain. Like you see at the picture shown here, the temple has a big garden around. I can imagine how beautiful this place was. 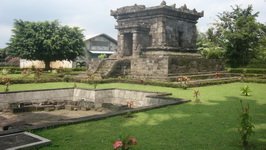 E.W.Maureen Brechter, a Dutch inspector, has found this temple in 1921. It was destroyed, covered with trees and ground. Then this temple is restored in 1925-1926 under the leader of De Haan, the Head of Archeology in Dutch Indie time. The last restoration was done in 1991-1992 by Indonesian government.

This temple consists of foot, body, and roof. When people found it, they just could see the foot parts. They collect the stones based on its sort and size. Then they tried to build the body. The foot and body were rebuilt but the roof cannot be found. What a pity. 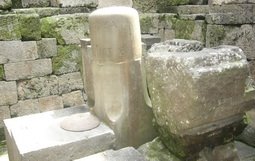 They also found the foundation of the wall around the temple. Here you can see the rest of the stones of the wall.

Among the stones there is also a statue but the head is missed. See the picture here below.

Although there are many parts are missing, this temple is still used by Hindu followers who come to pray on Galungan Day. This is a Balinese holiday that occurs every 210 days and lasts for 10 days. During this holiday the Balinese gods visit the earth.

This temple is located not far from Wesley International School. If you are in Malang make a time to visit Candi Badut. For photographers this is also a place to make good shots.