Since I had Dutch language and literature as my subject I feel involved with anything that has to do with Dutch or Netherlands in Indonesia. Either it is an Indonesian word that is originally from Dutch or vice versa, a building with Dutch architecture or any story about Holland (people) in Malang. Dutch nostalgia brings me back to the colonial time.

A real Dutch influence in Malang is Jalan Ijen that was a high class residential area for Dutch high ranked officials. Several of the houses are still the same but sad to say that many of them have been renovated to modern style. But ok, it’s another story.

Here I take you back to the Malang old time. You can feel the Dutch nostalgia through old pictures of places, nature and events in Malang. Of course there has been changed a lot because the population increased, the road and streets became narrow, more houses and more buildings were build, etc.

Enjoy the nostalgia journey! Here are they.... 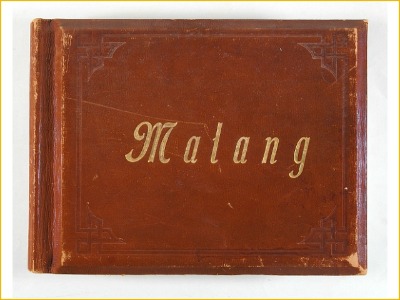 This photos album was to commemorate the visit of General Governor Fock to Malang on September 11th- 13th 1922.

Maybe it sounds weird but just looking these pictures gives me a special feeling, a kind of homesick feeling. At that time I am not born yet, even my parents haven’t met each other yet. Sometimes the feeling is so strong that I long to it,. No…I don’t miss the colonialism. I’m happy it’s over but it’s about the impression I get from the pictures. I saw calmness, cleanness and order. It wouldn’t be a bad idea if Malang could have it more now.

At that time Malang had city tram. I wonder why it is disappeared. Because it was not suitable anymore to Malang or it was destroyed because it was a colonizer "product"?

The pictures also give me a nice feeling to see the places I know for years since I am now at a place more than 7,000 miles away from Malang. Nostalgia makes me good.

Thanks to Tropen Museum for the photo’s and explanation.

Here below you see a video containing photo’s of old buildings that also have Dutch architect accent. The photos are taken recently but some are put on sepia colour. As you see many of them are not maintained well. However the quality is often better than new buildings.