Traditional market is called Pasar in Indonesian. There are still lots of Pasar in Malang although number of supermarkets is increased the last years. I can understand that people prefer to go to a supermarket with its air conditioned building and clean stuff. But traditional market can be fun too. First of all, the prices can have big difference with supermarket and the stuff (vegetables, fruit, spices, meat) is fresher. Who doesn’t want to pay less for better stuff?

Then the atmosphere at traditional markets is lively. Vendors and buyers chat with each other because they see each other regularly. There is a kind of friendship appeared between vendors and their loyal customers. Then display at this market is simple and traditional. Most female vendors still wear kebaya (traditional Indonesian cloth). 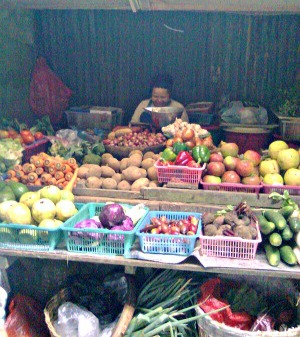 Official traditional market has a building in which people rent or own a counter for their stuff.  Those who have less money and cannot afford to pay the rent; they are still allowed to sell paying just a little to the authority.  The spot is outside the building, they put their stuff on the ground covered with the mat.  Mostly they just stay through morning until noon, and then they had to go.  They have limited time to sell than other vendors inside the building.

I remember when I was little, about 6 years old, my mom took me there.  She talked to many people, buyers and vendors, she seemed to know everyone.  The worst thing for me was when she had to buy fish or meat.  The meat section was actually ok but it was close to the fish section which was very smelly.  I always felt the need to throw up every time I was there.  To avoid the problem with the people around especially the vendors, my mom let me wait at the vegetable area or other counters, then she went alone to buy meat or fish and came back to pick me up.

Then the tradition goes on.  Once I took my daughter to a traditional market. When we were just at the entrance, she was about to throw up.  A couple of years later, my helper took my two kids also to a traditional market.  It was the first time for my son.  Do you know what happened?  Yes, the smell of the market made him wanting to throw up as well.  Like daughter, like son, like mother.  Fruits indeed never fall far away from its tree.

In such a market where many people sell same stuffs, it is easy to buy things from the same vendors.  In two traditional markets in Malang I often visit, Pasar Besar and Oro Oro Dowo, I also know some vendors and they know which day I usually come.  If I come at different day or time they will say, “I miss you yesterday” or “Oh, you’re late!”  They see a lot of people but they still recognize me and they also know what kind of stuff I mostly buy from them.  They have to race with the time because they cannot sell the same items for the next day.  The later the day the less people come.

My two favorite traditional markets in Malang are Oro-oro Dowo and Pasar Besar (Big Market). Why these two?

This market is not big but has lots of what you need in your kitchen. Due to the size it is not stuffy, the air circulation is better, and you don't have to walk a lot. When I moved in Malang, a friend told me that Oro-Oro Dowo is a market for rich people. I didn’t get what she said because this market doesn’t look exclusive at all, just the same with other traditional markets.

In my- and public opinion it's normal to bargain at traditional market. When I did shopping at Oro-Oro Dowo, I tried to bargain too. But the vendor looked annoying to me and said NO. Period. Later I realized that my bargain effort always failed there. Then I heard from other friend that vendors in Oro-oro Dowo don’t accept bargaining. The common rules there: Rich people don’t bargain. Aha….although I don’t agree with that, now I get the picture. 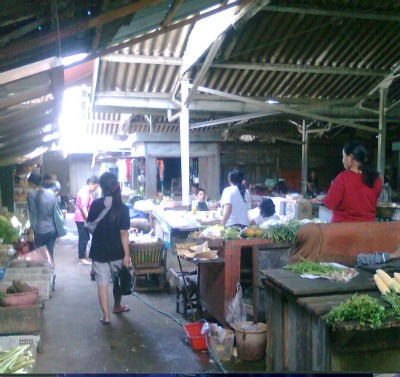 The name says itself. There are more vendors, more stuff and more quantities than other traditional markets. Some spices that are not available every day in a supermarket you can buy here. The prices are lower and you can try to bargain. You can find not just food stuff but also (traditional) cake mold, pans, dishtowels, cooking tools made of wood, bamboo and horn. You can find almost everything here even what you are not looking for.

Around Pasar Besar you can find shops of basic needs like rice, bean, sugar, oil, flour, etc for retail. People can buy it in a big amount and resell. You can say that the center of Malang economic is in Pasar besar and the area.

There is one thing that I found so amused.  In Pasar Besar there are some ladies from whom I often buy vegetables and chicken, who call me “dear”.  They might also say it to all of their clients I guess, but it is always comforting to me every time they call me this way but of course I don’t expect the same way from the salesmen.  I remember one day I went there with so many things in my mind.  At the market I heard them calling me dear.  They were happy to see me.  It really made my day.  I knew they expect me to buy a lot from them, but I also knew that they don’t just think about money, I can prove it to you.

One day I was in hurry to go there, I haven’t had my breakfast yet.  It was windy and I wore a shirt and sweater.  Inside the market was hot and humid.  I wasn’t feeling well.  I began to sweat and felt the pain in my whole body.  I felt dizzy and hard to walk.  One of the vegetable ladies whom I know looked worried to see me and said that I looked pale.  I couldn’t stand any longer so she gave me a place to sit.  I felt worse.  She ordered a glass of warm tea with a lot of sugar for me and she started to massage my head.  After a while I felt a little better and decided to just go back home.  The lady helped me bring my basket to my car.  What a trait!  She preferred to bring my stuffs rather than watching her own stuffs.  She might miss the buyers, but again other vendors would help her to keep an eye on them.

In the car, being too weak to drive, I called a good friend to send her driver to drive my car back home.

Since then my respect for those sales ladies in the market was growing.  They might look ordinary but their heart is extra ordinary.  I always think about them every time I see a traditional market.  I believe that they are the angels in disguise.

Visiting traditional markets in Malang gives you a great opportunity to know Malang (Indonesian) culture and daily life better. You can also see the original form of spices you prove in the yummy Indonesian cuisine.

I suggest you to go in the morning (7-8 am) so it will not be too hot, take some simple and easy cloth and watch out your wallet. (sorry to write this but it can be happened everywhere).