What you need to know, how it works, the price and tips

If we talk about the public transportations in Malang, you will learn about angkot or mikrolet.  The word ANGKOT is the abbreviation of ANGkutan KOTa which means the city carrier.  The word mikrolet comes from mikro which is taken from micro in English meaning small, so it is the small bus which mostly are the cars modified to carry a certain number of passengers around 6-10 people.

How to recognize public transportation

In Malang, you will recognize the angkot with its light blue color. To see the route of destination, you have to check the initials printed on the front mirror of the car, for example, AT stands for Arjosari Tidar, so the angkot serves the route of Arjosari (this is the bus terminal) and Tidar.  See the list of all the routes of angkot in Malang below.

This car doesn’t have the listed stops so if you get to your destination, you can just ask the driver to stop and let you get off then pay it directly to the driver in cash, they don’t take the card at all, so be ready with your money in hand.  If you need to go somewhere with angkot, you don’t have to go to the bus shelter to get it, just stand and stop it anywhere along its route.  At busy hours, you might not be lucky to get the vacant seat, some people then walk further to the quiet spot.  It looks easy and practical but it can cause chaos on the road especially for the people who drive behind this bus.  They always have to be alert that the bus can stop anywhere they want.  For the beginners, it causes headaches, but they’ll get used to it.  Moreover, like most other city drivers in Indonesia except Jakarta who mostly disobeyed the traffic signs, the drivers in Malang always take into account with each other.

The Indonesian drivers have higher tolerance than the drivers in other countries.  Once I drove steadily on a busy street in Malang, suddenly I had to slow down just like many cars in front of me.  I thought there was an accident happening but to my surprise, after a minute or two, everybody got their speed back again.  I noticed there was apparently a car making a sudden turn with no signal.  It could cause the anger from the other drivers, but nothing.  No horn, no angry faces, no curse, peace….  Accidents do happen in Malang for sure, no place is perfect.  I often say to my children, happiness happens everywhere so does accident.  Keep being alert is never too much to do. 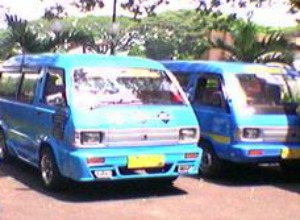 Let’s get back to our topic, public transportation in Malang, in this case, angkot.  If you want to get off of the bus just say “KIRI” (read: kee-ree) means left to the driver, he will then drive the car off to the left side and stops.  By the way, Indonesian cars run at the left side and stop at the left side too.  The steering wheel is at the right side.  Just like I said before, once you are off of the bus, you pay directly to the driver.  There is no conductor in this type of bus, it is to give more available places to the passengers, means more money for the driver.

This public transportation just costs Rp 2,500 (about USD 0.26) per adult and Rp 1,500, per child one way.  Sometimes the moms just put their child on their lap to give the seat to the adult passenger, so she doesn’t need to pay for her child, it goes the same to the babies, they are free of charge.  No matter how far your destination is, either 500 meters or 5 kilometers, the fee is the same.  Below is the list of angkot in Malang.

Angkot is not a kind of public transportation that gives lots of comfort but since it operates in almost all areas of the city even in the rural areas, it can make your trip in Malang easier.  It can also be a way to a new adventure of knowing Indonesian people and their customs better.

Another public transportation in Malang are taxi, ojek and becak. There are also the regular buses but they are operated only for long distances between cities, such as Malang-Surabaya, Malang-Blitar, etc.

Ojek is the term given to the motorbike used as a public transportation. It is not rented for you to ride but the rider will take you to your destination. It takes only two adults to go with ojek, you as the passenger and the rider, but if there is any child coming along, he or she will be seated in between the rider and the passenger.

Becak, it’s pedicab in English, is actually a three-wheel bike designed in a certain way that the passengers are seated in the front and the rider is at the back pedaling. The children love to go on becak, it looks like being in a moving toy for them. However though, it is hard for the person who rides it especially when the passenger is hefty and the destination is up in the hill. Most men who operate becak are from the low income family. Often they are older people, thin and weak. It is a dilemma to choose which becak we should get in. With older rider, it might go slow but if we don’t take it, they won’t get money for the day. You use becak mostly for short distance or if you’re too tired or too lazy to take a walk.

But it can be relaxing and a good public transportation for sight seeing, like some tourists on the picture below as posted at Malang Raya Info. 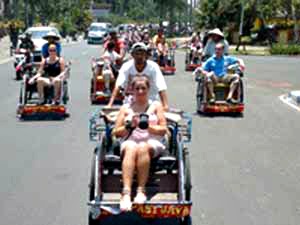 Before you decide to take the ojek or becak, you should ask for the price first as there is no fixed rate.  The fee depends on how far your destination is, sometimes the weather will play the role too.  If it’s raining hard, it might get higher than usual.  If you think that the rider gives you too much, you can make the bargain until both of you agree.

Here is the list of taxis in Malang.  Some naughty drivers will charge you without using the meter, happened mostly for short distance so be sure you ask the drivers first that you want to pay the price according to the meter.

Thanks to Malang Kota for the two tables.

Hope this information about public transportation in Malang helps and makes your stay easier.