I still had Beaches in Sempu island in my head after my visit to Segoro Anakan and Sendang Biru. The beaches that the guide told me kept inviting me to come and of course I cannot refuse the invitation. So, about one week later I went there again with a large group of 16; 7 adults and 9 children. 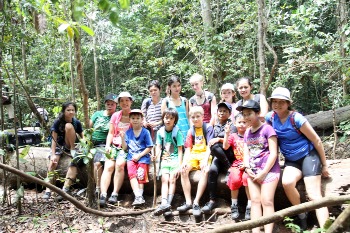 If in Segoro Anakan you have to climb the coral reef to see the open sea, here it is not needed.

We went from Malang around 8 am and arrived in Sendang Biru about 10 am. We arranged the permission first in the small office of the Forestry Ministry there and of course then we rent the rubber shoes. Because we had many children in our group, we asked 2 guides to go with us. You can find more information about prices of renting shoes, guide, etc, at the bottom of my story Segoro Anakan.

On that day lots of people had apparently the same idea as we do; going to Sempu island. We met them either they went towards the same direction or they went back to Sendang Biru. Many of them have stayed overnight in Segoro Anakan. They looked so tired and “un-neat”. But no one looked neat here…… so no worries.

After more than 2 hours walking, we arrived at Segoro Anakan. To my surprise there were large crowds and lots of tents. I realize that it was Saturday. There is really a big difference if you go on a weekday or week end.

The water at the lagoon was ebbed so you can walk till the coral reef between the lagoon and the open sea.

There were 5 people of our group who wanted to go to beaches in Sempu island. It is about 800 meters from Segoro Anakan. If we walk fast, it’d take about 20–30 minutes to get there. The rest of the group didn’t have mood to go walking again. One of the guides went with us because we didn’t have any idea where to go.

Actually there are lots of beaches in Sempu island. We just went to 3 of them because we didn’t have enough time to visit all the beaches although I’d love to. The beaches are Pasir Panjang, Kembar I and Kembar II.

The first 100 meters of the way was difficult. We had to walk upwards and between tall and coarse grass. After a while we arrived at a giant rock in the middle of the forest. It seemed so mysterious but beautiful. I never expect to find such giant rocks in the forest. Of course we stopped there to make photos. It’s too nice just to pass by. 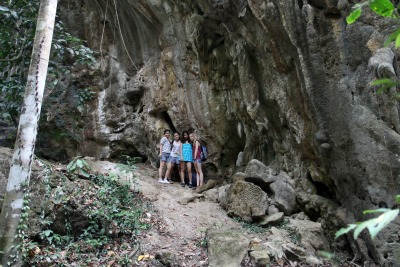 Then we walked again and soon we hear the sound of sea. Yes! The first beach in Sempu island, Kembar I beach!. 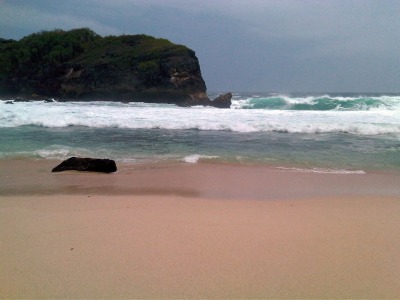 Kembar means twins. This is the first one. There was no-one at the beach except six of us. The sand was so clean and smooth. You saw the open sea and the waves that came endless towards the beach. I love it! It’s never boring to watch it. Due to the big waves and lots of rocks in the sea you couldn’t swim here. Mostly you can not swim in the South sea beaches like Balekambang. But you can always sit on the sand and feel the sea water touching you every time.

Not lot of people go to beaches in Sempu island. They might even not know about these beaches. Most people would think of Segoro Anakan if they hear Sempu island.

It’s pity that we couldn’t stay long at Kembar I beach because we had to go to the next beach. It’s not far from the first one, just about 20 minutes. The way was ok. Actually we just walked along the edge of the island. Then we arrived at Kembar II beach! Not less beautiful than Kembar I beach. 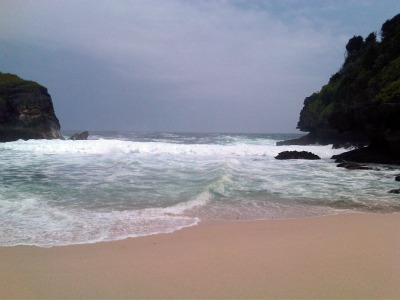 These 2 beaches in Sempu island look alike. That’s why they call them twins beaches. You cannot swim here either but the Kembar II beach is longer and the rocks are bigger. 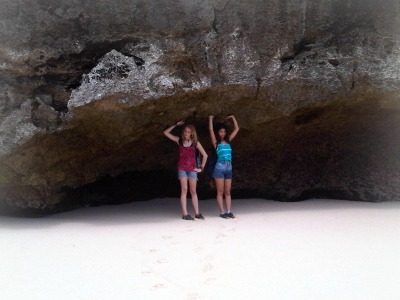 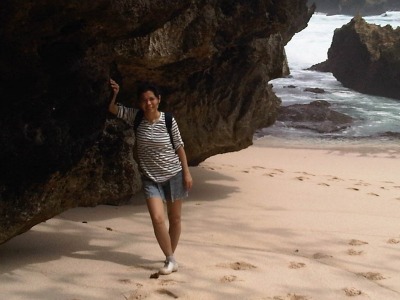 Then we went walking again, off to the third beach, Pasir Panjang beach. Pasir means sand and panjang means long. So this is the long sand beach. It is also known as the most beautiful of the three.

Like in the life, the better you want, the more difficult way you have to go through. The way to get the Pasir Panjang beach became harder. At the last you have to go downwards through a simple ladder. Hmmm.....another challenge. 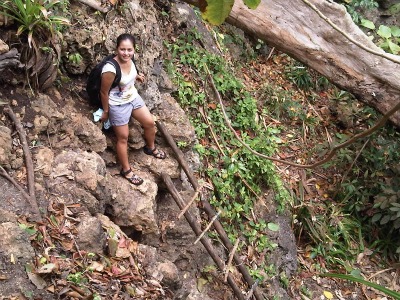 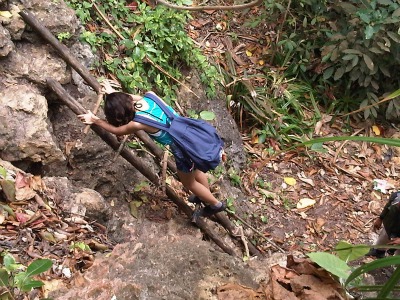 I’ve asked how old the ladder is. The guide just said that it has been changed several times and didn’t know how old this one is. I can say, it just seemed scary but it was ok and the guide knew what to do. Beside the beautiful beach is waiting for you…… 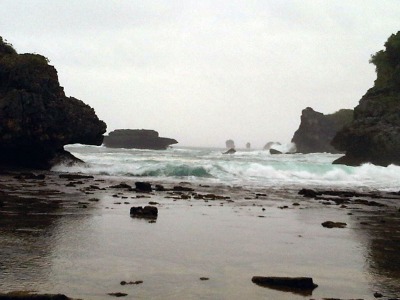 The water here at that time was also ebbed like in Segoro Anakan. So it didn’t look as blue as the first two beaches. At the right side of the beach you see rocks wall and a path between them. We just went there and wanted to photograph but the guide said to us that we have to watch out. “Normally tigers go to caves between those rocks”, he said calmly. We were surprised, What??!! Tigers??!!

“Look! Tigers foot print!”, he pointed at the sand. 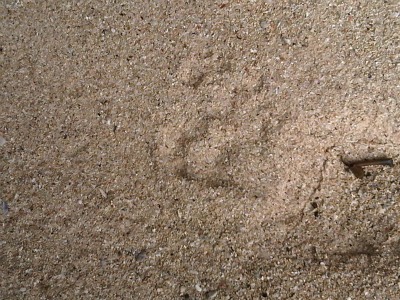 ”I think it was here just around one hour ago”, he said further. We were just speechless. This is indeed a nature preserve, no hotels or guest houses but there are still wild animals. Maybe it sounds a bit scary but just few visitors have seen them here. Even though the cave is so beautiful and tempting we didn’t have mood to go farther any more. I don’t come to beach to meet tigers.

At the end of the other side of this third beach there is another cave. They call it Green Cave because it is covered with lichen. You have to climb a high wall of 90 degrees. The guide climbed up first and then my friend, Lusy. When I saw it, I just thought, “It wouldn’t work for me because my body is not that flexible. The guide assured me that I could. I remember a saying “If you don't try, you will miss opportunities”, so why shouldn’t I try? It cost me a bit fear and lots of sweat but finally I was up there. Yes, I did! 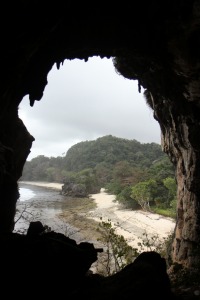 The cave is not deep. You see many stalactites there and the view to the sea was wow! After enjoying the view and making pictures, it was time to go back to the place down there. I had still a bit of worries but more confidence.

Then we walked back to Segoro Anakan. We really preferred to stay longer at the beaches in Sempu island but we had to go back to Sendang Biru before it became dark. Especially we had small children in our group so we had to take more time.

I wish I could stay overnight here so I can see the sunset or sunrise but drink water will be a problem. You have to bring at least enough for 2 days. I know, if I got a chance I’d just go back here. My favorite beach of these three in Sempu island is the Kembar II.

Sometimes it is difficult for me to describe a beauty with words. That’s why I give you this slide show to show you the beauty of these three beaches in Sempu island. Beside, a picture is 1,000 words worth, right? These beaches are hidden beauties of Malang. I won’t limit them with my words. You get the freedom to enjoy them (mouse over the image to see the description).

Return from Beaches in Sempu island To Malang Beaches And Waterfalls